NATIONAL DAY OF THE COWBOY


Saturday, July 28, 2012 is the official National Day if the Cowboy. Check out some of the events in celebration of the American Cowboy Heritage.
http://www.nationaldayofthecowboy.com/

You might be surprised to find that there are cowboy artists and cowboy poets and cowboy authors. All inspired by the culture that forged this great land of ours.
I was born and grew up in . Cowboys were a common sight. Not the kind that I see around during the Livestock Show and Rodeo, with big shiny buckles and expensive ostrich boots, but real, working cowboys. I guess that's why I have to giggle when I see the covers some of my fellow romance writers have on their "western romances". I just want to say, Oh, yeah...cowboys always go to the gym to get pumped up and then wear a leather vest with no shirt...Um hum...Standard cowboy garb...NOT!!!
First of all, while a real live cowboy might have occasion to remove his shirt from time to time, they do not have spray-on tans nor do they shave their body hair. I have heard women make all kinds of swooney comments about these cover boys, but come on now...really?
When a real cowboy cleans up to go to town, they know what the women like. Clean is first on the list. A starched western shirt is really a must for sexy cowboys...Did you ever notice that those snaps pop right open. <g>
And haircuts? Scroll through the pix of real working cowboys. They have neat haircuts and do not appear to be anything like the guys who were modeling as street thugs in jeans the week before they got the call to be 'cowboys'. Why? Because working on a real live ranch is hot and short hair is a must. Hence the term, rednecks...sunburns on exposed necks. When they drive their trucks into town for their regular haircuts (pronounced harcut) they go to a real barber and not a stylist. Seriously, you want to put product in his hair? What is product?
BTW...It's not ever a pick-up truck. It's a pick-up or a truck. Please get this right.
And cowboys do love their horses. Their horse is their friend and companion and probably understands them better than their girlfriend.
I have to share with you that a really sweet romance author from the east coast called me up and asked the question, "What do you say to a horse to make it go?"
When I stopped laughing, I suggested that she might want to write something she knew more about. But she persisted, and chose an image of a cowboy in a leather vest with a smooth, bare chest for her cover. No, I haven't read it. I don't want to know what she thinks you say to a horse to make it go.
Finally, a male friend of mine pointed out that when a cowboy gives his word, it means something. If a cowboy shakes on it, you can take it to the bank.

I am in the process of producing a sequel to my novel, BADLANDS, a romantic suspense set in the panhandle. Yep, there are cowboys, horses, ranches and action. Here is the Amazon link if you want to take a look at it Book I.
http://www.amazon.com/Badlands-Contemporary-Romantic-Suspense-ebook/dp/B005341WX2/ref=la_B0050KEWMM_1_7?ie=UTF8&qid=1343063380&sr=1-7
Here is an excerpt from the sequel. For those of you who asked for it, I am giving you a second helping of : In this scene, Jenna, the local veterinarian, has had a run-in with E.J. the reluctant Dallas-bred rancher. She goes to the Friday night dance at the Eagle's hall and she's looking for a real cowboy, someone who shares her love of the wide open spaces and ranching as a way of life.

And if you're interested in kids and reading, check out this event in which Barnes & Noble supports Read em Cowboy:

http://nationaldayofthecowboy.com/wordpress/?p=52
And if you like sexy country music, check out this Kenny Chesney video: http://kilt.cbslocal.com/music-videos/Kenny+Chesney/Come+Over/USBVA1200012/

Have a great weekend...and get your cowboy on. :-)

I admit being a Southerner and proud of it!

One thing, besides Sweet Tea of course, is that we all know Southerners love biscuits. Beautiful golden, flaky, fresh out of the oven, melt in your mouth, biscuits. There isn't much you can't add inside a sliced biscuit that isn't tasty, or covered with milk gravy. Or sliced, buttered and toasted in an iron skillet. Too good!


Now that said, being a diabetic, the old fashioned biscuits are almost, notice I said almost, a thing of the past for me, because they spike my sugar. I still enjoy a delicious bacon biscuit from my favorite eatery once in a while though. :)


I happened upon a recipe for whole wheat biscuits a couple of months back from WebMD site. Here's the link if you're interested.


The process for these biscuits is a bit time consuming, but worth the effort. Gone are the days when I could mix up a batch of biscuits in a matter of minutes and pop them into the oven.


I wanted to post the recipe here, but didn't have time to get permission from the site. You can find many recipes that call for wheat flour if you, like me, can't eat a lot of white flour.


I have a pasta maker, but haven't made any with it yet. Time to drag out the unit and get started!

Do you have a favorite recipe using wheat flour? If so, I'd love hearing from you.

Several theories have been proposed about the origin of the Friday the 13th superstition. One theory states that it is a modern amalgamation of two older superstitions: that thirteen is an unlucky number and that Friday is an unlucky day.
In numerology, the number twelve is considered the number of completeness, as reflected in the twelve months of the year, twelve hours of the clock, twelve gods of Olympus, twelve tribes of Israel, twelve Apostles of Jesus, the 12 successors of Muhammad in Shia Islam, etc., whereas the number thirteen was considered irregular, transgressing this completeness. There is also a superstition, thought by some to derive from the Last Supper or a Norse myth, that having thirteen people seated at a table will result in the death of one of the diners.
Friday has been considered an unlucky day at least since the 14th century's The Canterbury Tales, and many other professions have regarded Friday as an unlucky day to undertake journeys, begin new projects or deploy releases in production. Black Friday has been associated with stock market crashes and other disasters since the 1800s.

So, it's time to change all that bad luck and superstition. Today Tara and I have a treat for you. Not one, but TWO free books, just in case you decide to curl up with a good book and ward off all that bad luck waiting out there to jump  on you.
Here is the link to download a free copy of my romantic thriller, BAD KARMA 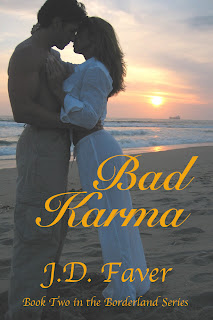 And here's the link to download 's historical romantic suspense: Hawaii and a few funnies 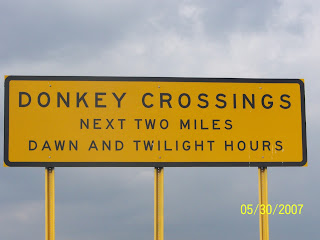 We were in a shopping center and this was the stop sign we saw. My son couldn't resist. He parked the car, jumped out and seized the picture! I love it! 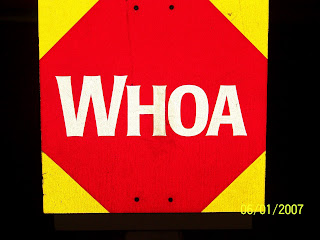 Our condo was on the desert side of the Big Island. So beautiful. We made the best of our trip, but about killed ourselves trying to get in as much as we could in a week. Every morning we found turkey's roamed into our yard from the golf course. 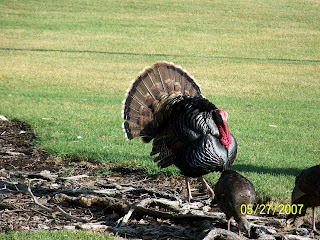 We usually saw eight or more daily. My grandson, who was six at the time, was amazed that the turkeys would gather so close to us. In the photo below, he giggled the entire time. He couldn't get over the size of the leaves in the background. Neither could I. Humongous plants! 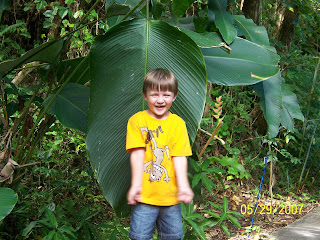 We shopped, ate, went on a submarine and helicopter ride, enjoyed a Luau and whatever else was available, we did it. I felt sorry for my son, as he did all the driving. But...he didn't complain. : )


If you haven't been to Hawaii, I highly recommend a trip. We'd love to go again, and hopefully will before too long.

What are some of your favorite photos?


www.caroldevaney.weebly.com
Posted by J.D., Tara, Carol at 3:35 PM No comments:


And...Happy Birthday to our beautiful America!


Today is either a lazy day or an extremely busy day for everyone. Families gather at mountain retreats, lakeside cabins, a day at the lake, someone's home. Wherever you meet, the day is filled with hugs, laughter, good conversation, and good food.


Our Fourth has changed over the years. We used to spend days at the lake, boating, swimming, fishing and cooking out for a group of friends and family. These days we're kicked back and work in the yard or watch ballgames.


My son is all about fishing. His son, age eleven, had a fishing pole in his hands as soon as he could hold one. Over the years many a fish has landed on the banks. This morning my son called at 8:00, he'd taken my grandson fishing at his other grandfather's lake. He emailed a photo of my grandson's latest catch. It was a huge Bass! My grandson said his dad told him it must weigh in around four pounds! That's a big fish! Did they keep the fish? No. They turned the nice catch loose so they or someone else could catch it again. I think that's the best thing to do.


I hope you have the best and safest holiday ever.


Do you have special memories of The Fourth of July?


This excerpt is from "A Smoky Mountain Christmas."

"Oh! Sorry." Apparently now wasn’t a good time for brain freeze. Since the man was the only warm body she’d seen in hours, and the exasperated look he’d given her, she’d best try to concentrate, hard though as it was. The prison escapees hung in the back of her mind.
Tina tried a couple of times to turn the engine over. But all she heard again was - click, click, click. That, too, faded into the crisp air.


www.caroldevaney.weebly.com
Posted by J.D., Tara, Carol at 7:22 AM No comments:

This seems to be one of those times when life demands that you hold on tight with both hands because it's flying by.  My son and his wife had their baby boy last week. This was a few days after my mom's 85th birthday celebration.  So, this post is pictures. Here's the baby when he was less than an hour old. 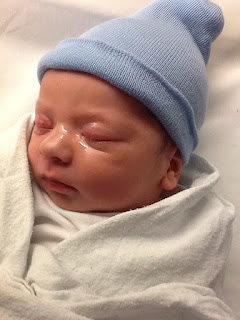 The video is one minute and destined to be a classic -- at least in our small circle. My sister insisted on putting all 85 + 1 candles on the cake.