Sink Your Teeth Into This...


I’m surfacing. Finally. Please excuse the flour dust and my apron.
Because I’m a little left of insane at times, I decided I needed a change from my normal writing routine. As June keeps harping I am such a foodie that I should be writing a cookbook. Since I was spinning my wheels in other areas, I took up the challenge and joined her and Stephanie Berg in assembling a cookbook. The first one is different from the others I have planned. More on that in a moment.  This one is A Vampire Cooks: 40 Recipes to Sink Your Teeth Into. http://www.amazon.com/A-Vampire-Cooks-ebook/dp/B009C0PC66/ref=sr_1_1?ie=UTF8&qid=1347918184&sr=8-1&keywords=A+Vampire+Cooks+Tara+Manderino

I love writing about vampires. Since vampires have problems eating, I had to think about what they would like to serve their mortal friends. The recipes are light on a variety of colors: red predominates.

But why write a cookbook at all? Because I am not just a foodie. I grew up in a family of foodies. A little background: I’m of Italian descent. My father’s family was from Calabria and Abruzzi. My mother’s family is Sicilian. With that kind of background there were always a lot of family events growing up – holidays, birthdays, religious milestones – and they all involved food. Lots of food. This doesn’t count the spur of the moment visits by family and friends (most who were Italian), which entailed more food. This scenario is not so different from what a lot of people experience. Now these larger events often meant both sides of the family would be together in the same house at the same time. No problem. Where some families would talk about current events  my family talked about – food. Not just how to prepare it or where to buy it, but about the food business.

My father had a pretty exclusive restaurant.  I grew up there. By the time I was 9 I knew how to devein shrimp, write menus and make French Onion soup. In quantity. When I was older, he had changed venues (long story about the building) and now had an Italian take out and pizza shop. I could toss pizza with the best of them. My father had one sister and two brothers. The sister married and had a family and cooked a lot. One brother who lived nearby decided to open his own pizza shop. His sons pretty much run them now and he oversees things.  The other brother had a restaurant in New York City. On my mother’s side, her mother had a pizza shop (think we had a monopoly here?) and my mom’s sister also worked there. Since my grandmother would occasionally keep an eye on the grandchildren, we all grew up assembling pizza boxes, making sausage, making pizza sauce and leaning how to sweep out the pizza ovens. As soon as we were tall enough to see in the ovens, we would get the peel and check for doneness and yell to an adult to remove the pizza.

Current events at the dinner table?  Not here. It was about pizza ovens, recipes, the competition and exchanging trade secrets. The Abruzzi/Calabrese side vs the Sicilian. It was never dull.

I plan on talking more about my family, and food in the future cookbooks I have planned. How could I not? The next two deal with biscotti, and Christmas Eve.  For now, since I’m in the mood for soup, I’ll leave you with one of the recipes from A Vampire Cooks.

Manhattan Clam Chowder.
Very different from its heavier New England cousin, this soup has a red and flavorful broth.
Ingredients:

From Deep in the Heart of Texas

A few years back, I wrote a cookbook. This idea was born when my son married a gorgeous girl from New York and he moved up there from Texas with all his worldly possessions in his pick up. My daughter-in-law is a lovely young woman and when she called me one day to ask if my son was pulling her leg about chicken fried steak, I wasn't sure how to answer.
"I mean, you don't actually put batter and gravy on a perfectly good steak do you?" she insisted.
This gave me pause for thought. There are so many things we take for granted, and certainly the foods we grow up with are a part of our comfort zone. So I set about chronicling our lives in food.
The oldest recipe in my possession had been an old recipe when I was a little girl. My grandmother had a box of index-size cards and papers folded to fit. One such paper had yellowed with age and was hand written in loopy cursive. My grandmother informed me that this recipe had come over on the boat from Ireland when one of our foremothers (yes, that's my word and I'm sticking with it) immigrated during the potato famine. My grandmother frequently prepared this version of Irish Potato Soup, especially when someone was feeling under the weather. I know from experience that this soup will fix you right up, no matter  the ailment.
In our family this is known as "Irish Penicillin."
I wrote down every recipe I could think of that I had ever fed my son. Now he grew to be a great big 6'4" strapping, Texan who ate everything that wasn't nailed down when he was growing up. I swear I never knew what leftovers were until he left home.
Then I expanded my recipe collection as I went along. When my mother was alive, I asked her for some of the recipes she had made and I wrote them down as she dictated. I also contacted my mother's youngest sister and she contributed some of her favorites. My collection ended up being quite a large tome. I printed it out and bound it as a cookbook for both my daughter and daughter-in-law one Christmas. I also made a CD for them in case they wanted to add their own recipes.
Recently, my friends and fellow authors, Tara Manderino and Stephanie Bancroft Berg were chatting with me about our recipe collections. The upshot is that we decided to publish our individual recipe collections.
I am going to put out four seasonal cookbooks from my own perspective here in Texas. Tara, a Pennsylvanian of Italian descent cooks and bakes all the time for her family. Stephanie is of German/French ancestry and lives in Michigan. So we are all working hard to share our love of cooking with the world at large.
Next week, I will be sharing a peek with from the first to be published: A TEXAN IN THE KITCHEN~Autumn Recipes. I sincerely hope you like this because it comes from deep in my heart...
*hugs*
~J.D.

The Hole in my Heart

by J.D. Faver
Having a quiet, sad, reflective few days after spending a week comforting my old dying cat. She wasn't in pain and spent most of that week in my lap or on my bed. I tried to rub her ears off and she rewarded me with lots of purring. Em

ily has been my loyal companion for 17 years, which was amazing since she had an enlarged heart and a vet told me she shouldn't have lived more than a few years. I can agree that she was a kitty with a big heart and a big attitude. My wonderful son-in-law came over (they all did) to make sure she got a proper burial. Glad I have a family that understands the importance of the furry family members. So, I have a hole in my heart, but Daisy, my other cat is trying to make up for my loss by becoming a cat-version of Velcro. Life goes on... 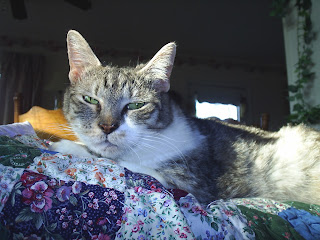 This is Emily, the small, bossy Manx that was my long time companion. What she lacked in tail she made up in attitude. She was able to express her wishes quite eloquently. 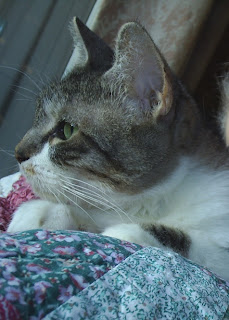 Emily was the official greeter. Anyone who entered our house would immediately have an opportunity to pay homage to the cat...the whole cat...and nothing but the cat. Since she was gray and white, you were always outfitted with cat hair to coordinate with any outfit. She had white socks with one little striped paw on her left forepaw which you can see in this picture. Yes, I miss my kitty. I keep expecting to see her on my bed or in her favorite window spot. As I write this, Daisy (my 25-lb white cat) is plastered against my thigh, delivering a massage and purring. I'm sure we both need the comfort. ~J.D. Faver
Posted by J.D., Tara, Carol at 7:46 PM 2 comments: